The Tall Book of Mother Goose

Written and Illustrated by Feodor Rojankovsky

Russian-born artist Feodor Rojankovsky illustrated this novelty-formatted book of nursery rhymes soon after fleeing Nazi-occupied Paris for New York. With his caricatured depiction of Humpty Dumpty sporting an Adolf Hitler mustache, Rojankovsky forecast a bad end for the German dictator. Postwar editions of this perennially strong seller retained the image, even after Rojankovsky revisited the book in 1965 and replaced an illustration of a nanny that had drawn criticism for being a stereotypical depiction of a woman of color.

An egg with a human face? The English nursery rhyme that introduced Humpty Dumpty—the popular archetype of the doomed or hapless hero—is itself quite short on physical description, and for good reason. Long before the days of illustrated Mother Goose collections, this witty rhyme started out as a riddle. "Humpty Dumpty" first appeared in print in England in 1797, in Samuel Arnold's Juvenile Amusements. Lewis Carroll archly embellished the character in Through the Looking-Glass, as James Joyce would again do in Finnegans Wake.

Nineteenth-century American actors George L. Fox and Tony Denier won fame and fortune milking the role for slapstick laughs, and illustrators from John Tenniel to Charles Addams scrambled to refresh our image of the mock-tragic figure. So ingrained in our collective psyche has "Humpty Dumpty" become that cultural icons and iconoclasts from Aretha Franklin ("All the King's Horses") to Bob Woodward and Carl Bernstein ("All the President's Men") have adapted its memorable catchphrases.

Through the Looking Glass, 1872 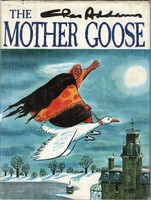 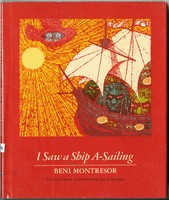 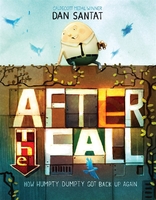 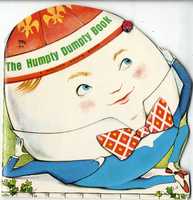 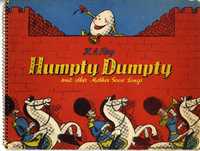 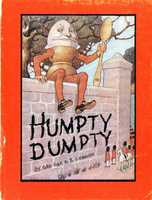